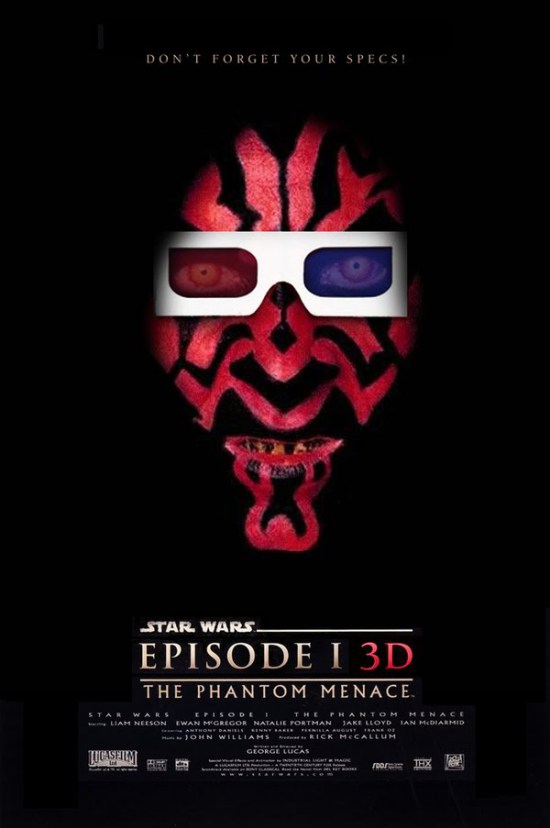 The 2009 prequel was set to be the first of the epic space adventure series to hit cinemas in 3D! That plan either fell by the wayside or just didn’t make enough of an impact to  be viable. Nevertheless i attended one of those illustrious showings and brought enough information back to write this post :

Let’s get this out of the way now – YES! Jar Jar Binks is annoying, but no more so in the 3D rendering.
(Now that we’ve dispensed with the unpleasantness we can get down to the good stuff)

While Phantom Menace is hotly contested as the weakest of the series (aside from some incredible light saber sequences and choreography you know i’m right), it makes a perfect candidate for a 3D release.

The 3D itself is not overly involving for the audience, given that the look of the film was already quite modern to begin with, more that the 3D serves as more of an aid to the Special FX. It lends an element of depth to the action within the scenery and (during some sequences) even provides the viewer with an element of proportion.

The Podrace scenes benefit largely from this treatment as does the interior scenes involving the Senate, but the real enjoyment is to be found in the light saber exchanges. Every spark, every clash and every spinning blade looks fantastic in this lovingly digitized version.

Having the films back in cinemas is obviously a bonus for the fans but its also another chance for a new generation of fans to experience the films on the big screen. Love it or hate it, it’s a joy to at least have the opportunity again.

As i stated the 3D release of the first 6 films seems to have been abandoned. The official statement on StarWars.com from January 28, 2013, (now available only on archive.org):

Lucasfilm has decided to postpone this fall’s scheduled release of Star Wars Episodes II and III in 3D. Given the recent development that we are moving forward with a new Star Wars trilogy, we will now focus 100 percent of our efforts on Star Wars: Episode VII in order to ensure the best possible experience for our fans. We will post further information about our 3D release plans at a later date.