I’m going to do my best to review Casino without mentioning its spiritual predecessor and older sibling : Goodfellas. This classic from 1995 is a ripe old age but has it stood the test of time?

Casino has been described as an epic crime drama but I’d go as far to call it an alternate reality sequel to Goodfellas. It is based on the nonfiction book Casino: Love and Honor in Las Vegas. Directed by Martin Scorsese and starring Robert De Niro, Sharon Stone and Joe Pesci, it loosely follows the vaguely true story of a Jewish American handicapper and his day-to-day running of a Casino for the mob. If Goodfellas is the quintessential mafia movie then Casino is the echo of that.

The film pushes the romance and glamour of Las Vegas, and to a certain extent, a sullied version of the great American dream. The theme of opportunity is prevalent throughout especially in scenes regarding Nicky Santora (Joe Pesci), who constantly alludes to carving out his slice of the Vegas pie. In that sense the filmmakers do parallel this nicely to the old wild west. During the 70’s (as far as the Mob were concerned) Vegas was essentially a lawless frontier, “open wide” and “ripe for the taking”. The characters constantly refer to the way things are “out here” and (more interestingly) the way things are “back home” (mentioned 16 times during the film despite us never finding out where that is). 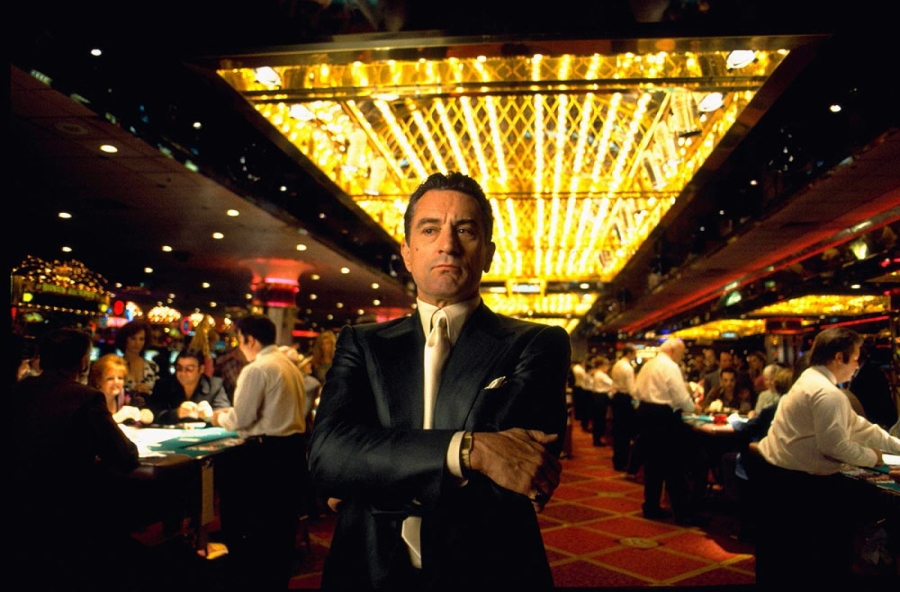 Ace (Robert De Niro) is a great character. He is multi-layered – A loving father and a devoted husband. Ace is a professional when it comes to gambling and always plays the odds. He is fastidious and detail orientated, which makes his choice of the volatile Ginger as a wife really fascinating. Very much a trophy to be won she is not his usual “sure thing”. There’s a great feeling that despite the problems with their relationship, Ace and Ginger are the king and queen of Las Vegas.

The casting works beautifully and the characters come cross richly. Sharon Stone received an Oscar nomination and won a Golden Globe for her performance in the film which was among her finest. A lot of improvisation took place in this film and it comes across naturally. It is apparent in some sections – like the covering your mouth scene with Nicky outside the Gold Rush. This may or may not have contributed to the use of the word “fuck” which is used 422 times during the film.

Ace’s mannerisms and ego are addressed throughout the film and given that his work ethic is so admirable it makes Nicky’s scoffing so much more entertaining.

This is arguably the most stylish mafia film ever made. There’s a solid Soul and Rock n Roll soundtrack to this flick. Much of the musical cues are invasive but work to abrupt effect becoming part of the action. Shot-wise the composition was fantastic. The long docu-take type angles, cuts and transitions kept the pace fast and loose. The costume department didn’t miss a trick when it came to dressing Ace either.

The long and short of it is that Ace was an idiot. He made very poor choices obviously, but all in the name of narcissim. We can see his narcissim at work in is decision to go on TV.
However Ace is very much the victim throughout the film. A victim of his own vanity. but also a victim of everyone around him, and he essentially brought it all on himself. Ginger is obviously a big part of his downfall but Nicky is a more explosive catalyst for this. For the most part we see Ace just put up with Nicky and his actions.

It’s fair to point out that no new ground was broken here. This is not fresh material. This is not innovation in the genre but a very solid Goodfellas 1.5. I am (still to this day) somewhat bothered by the blatant dummy in the car right before the explosion in the opening scene (It sticks out like a painfully throbbing sore thumb). But maybe narratively that was the point? That aside, this film is great and not at all a heavy watch. It definitely stands the test of time.

I’ll leave you with a clip of Siskel and Ebert famously clashing over it :

CHECK OUT OUR AMAZON AFFILIATE STORE

All words used with the kind permission of the English language. No feelings were harmed in the making of these articles. Opinions expressed here do not reflect the opinion of nerds everywhere. All pictures used without permission

CrazyDiscoStu 2016 0nwards until the oceans dry up