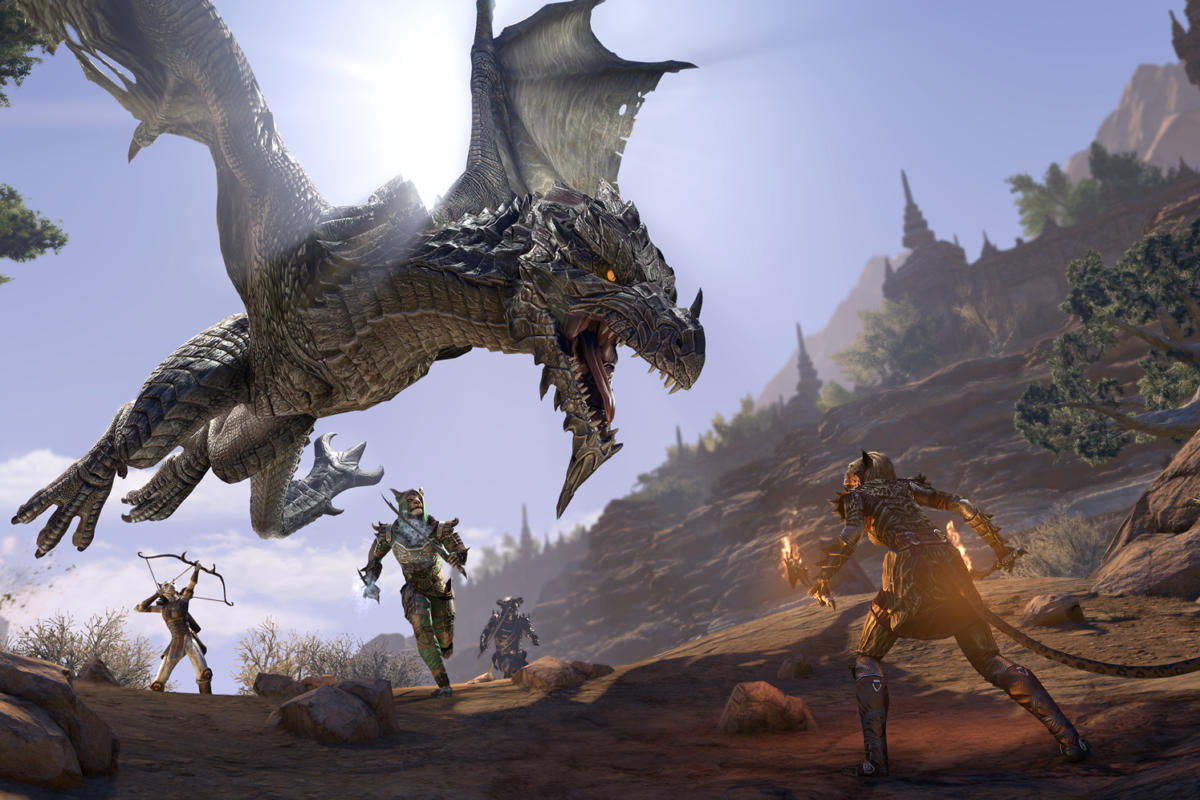 After my initial dive into ESO (you can read it here) i felt like the waters of this game were too vast – there is so much to see and do. Coupled with the release of RDR2 and wanting to level up my light in Destiny 2 i must confess i had to largely abandoned the stunning and expansive MMO to shoot cowboys and aliens.

It wasn’t that i didn’t enjoy it (very far from it) but when you run a nerd blog you have to stay up to date with the latest gaming trends and practices, you sometimes lose sight of games being an avenue for enjoyment and not just a subject to report on. 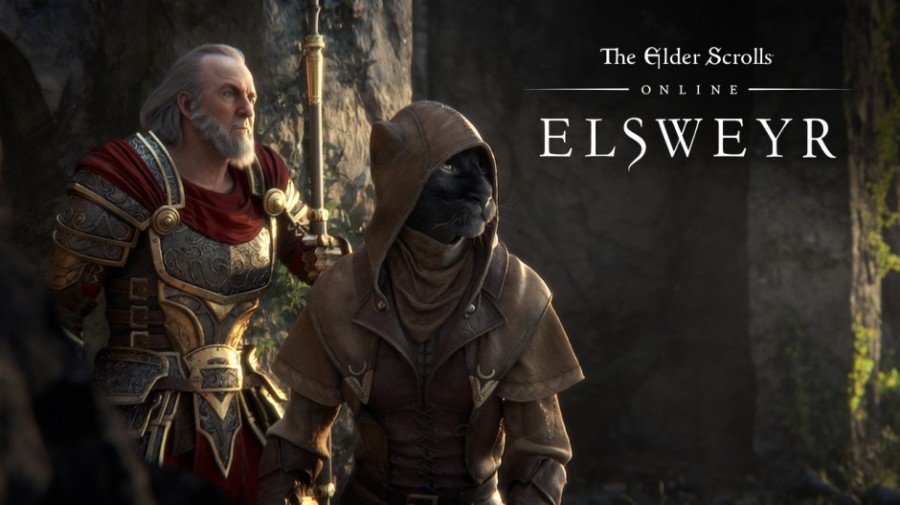 Either way, when i heard Elsweyr was coming out i hung my cowboy hat up, dusted off my lightening staff and screamed LEROY JENKINS at my Xbox One.

As with my previous introduction to this MMO i had some planning to do : I began by notifying my employer that again I would not make it to the office for the foreseeable future. This decision was then re-negotiated and mutually we decided I would manage my game-time around the 40 hour work week we had previously agreed upon.
I then broke up with my (now, long-suffering) fiance. Or at least I think I did. I was in-game during the conversation so i may be confusing the exchange with a cut scene. I can’t remember my exact dialogue choices so maybe that one didn’t play out like i think. (and i may have made some bold and nonchalant choices with regards to wedding planning details in the process)
And finally I notified my friends and family that I would not require interaction for the next few weeks. They staged an intervention which I thought was a nice gesture. But ultimately they agreed to periodically check in on me.
Finally I was ready to enter the world of Elder Scrolls Online’s Elsweyr DLC….. What really hits home upon re-entering the game is the sheer size and depth of the world and its lore and questing.

I’ll get my initial gripes with the base game out of the way first :  The navigation system for quests is not at all user-friendly. When you do find where to set your active quest it seems like you are following the waypoint for an eternity, only to discover that the waypoint was bringing you to a break in the map or boat/cart. And when the boats captain/cart driver offers you 3 destinations there is absolutely no hint from the quest as to location. (IE : when they offer you Ebonhart Pact Territory, Daggerfall Covenant territory or the First Aldmeri Dominion territory and your quest description is “talk to jimmy at Doklu“.

I understand the mechanics of exploration. I’m not adverse to exploring and discovering new and interesting places – but when you spend an hour looking for a quest start (and can’t take on new quests cos your quest log is full) it becomes frustrating to see a constant mirage on the horizon. And whilst i could use fast travel to wayshrines – this costs gold – and given the constant tomfoolery in locating the quest (and a local wayshrine) it all adds up.

But i digress. Lets get into the expansion : 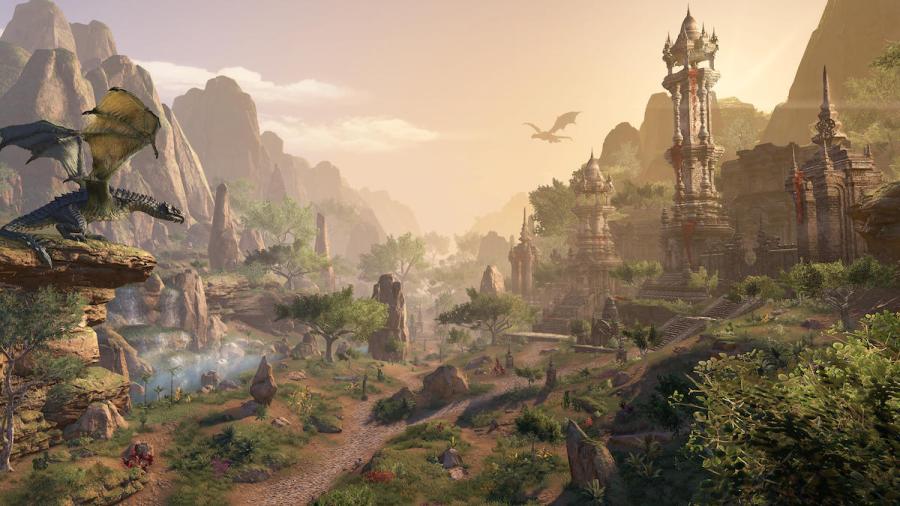 Elsweyr is beautiful. That’s the first thing that hits you about it. Set in the Khajiit homeland the expansion has a Mediterranean or Middle-eastern vibe. Persian-like. It’s not all baked ground and desert but these portions of the map are stunning and help to put you right into the game. Incredible vistas are the main course on this menu and it puts the Khajiit into perspective. (Fun Fact! : There are 16 breeds of Khajiit so this is a MMO for crazy cat ladies) The musical score is exotic and adventurous. Thematically it aids to facilitate the immersion.

“THE ELDER SCROLLS ONLINE: ELSWEYR The Dragons have returned to Tamriel. Unleashed upon the world by the unwitting Abnur Tharn and the Imperial usurper queen Euraxia, the great Kaalgrontiid and his followers hunt from the skies and threaten to burn down the ancestral home of the Khajiit. Elsweyr is packed with new stories, adventures, and challenges, including:

A host of updates and quality-of-life improvements”

Elsweyr‘s main selling point for me was the dragons.  Much like the dark anchors in previous iterations these are fantastic opportunities for the player base to band together in a PvE experience. Their constant circling of the map not only provides a moving threat but also a chance for participation in a community event. As world bosses go these offer unique mechanics and new rewards. After Game Of Thrones i think it’s time we make dragons cool again. errrrrrm M.D.C.A. The main plot is around 10 hours spanning 3 main quest lines, but in true Elder Scrolls style it’s the sidequests that really carry the weight. And as usual there’s a good amount of action and humour worked in.

The new Necromancer class makes for a fantastic edition. A great class for any play style. Having the NPC’s react to raising the dead (near a town or settlement) makes for some interesting gameplay (given that necromancy is a crime in Tamriel). This class has 3 new skill lines Bone Tyrant, Grave Lord and Living Death. Given that Necromancers are as cool as dragons it’s safe to say this is the most metal a DLC has ever been.

I’ve heard countless reviewers saying how easy the main quest is. Well done you. Regular gamers just enjoy this one for what it is.

In conclusion : Now could be a great time to get invested in ESO. The year of the dragon boasts a roadmap of upcoming content. As i’ve previously stated – the MMO is great for banding together on adventures with your friends. The community is a positive environment. This expansion isn’t going to convert you if you weren’t a fan of Skyrim or ESO base game. If you were then this is a welcome addition to the MMO.

The reason this is such a well rounded MMO is the ability to play as any class and style. You will find a fit for the quests. It’s a game were attention to detail is a factor and not just a novelty. Elsweyr is the culmination of 5 years of content, 25 years of consistent and crafted lore.

I for one welcome our new dragon overlords…..

Have a sweet roll! 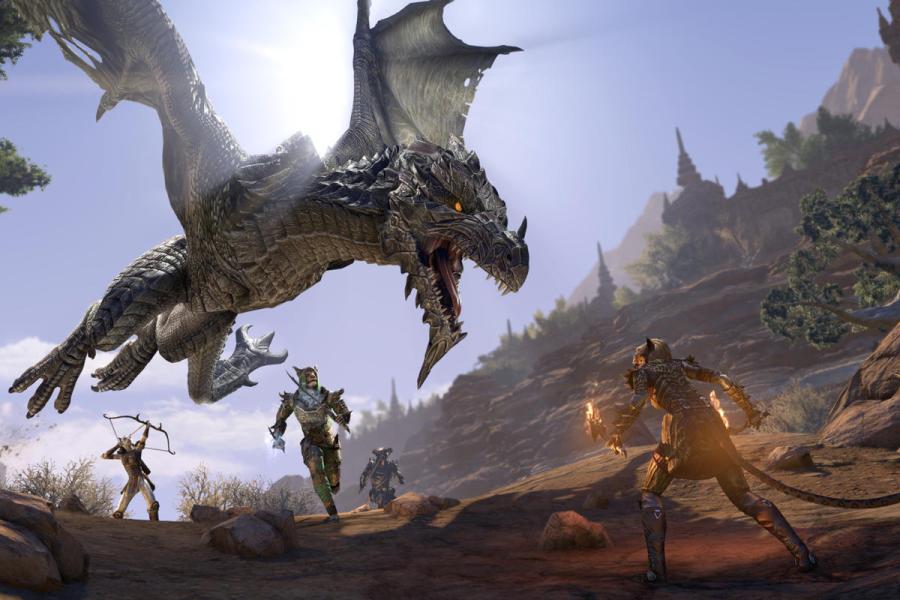