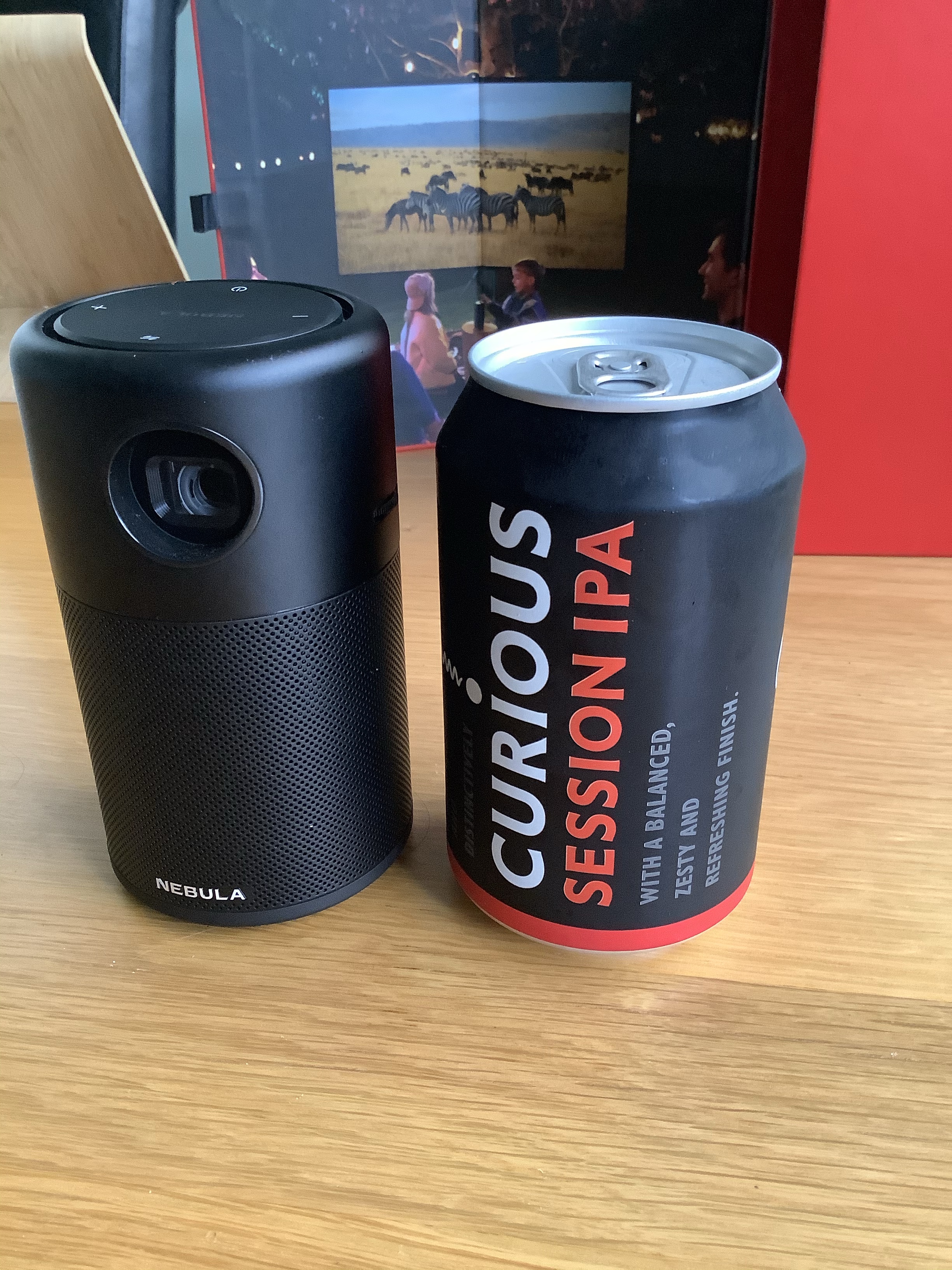 Today we’re looking at the Nebula Capsule portable projector by Anker. We put the product through its paces and tested this “soda can sized pocket projector”. Here’s their pitch :

“Capsule unleashes a world of entertainment possibilities beyond the confines of your home. Enjoy movie night in your back garden, at the campsite, or even on the beach. Just slip it into your pack for truly unbridled entertainment. Enjoy your entertainment the way you were always meant to: on a BIG, BRIGHT screen. Capsule’s 100 ANSI lumen bulb is capable of projecting a picture of gigantic proportions – 100 inches to be exact.“

Disclaimer : This product was not supplied for review – I took full advantage of the Prime Day discounts and secured 40% off the retail price. Like a boss.

I was in the market for a portable projector at an affordable price – these were my only real stipulations. Anker caught my eye early on and thankfully remained on my shortlist throughout.

Unboxing the Capsule, the packaging is professional and not a millimetre is wasted. It feels like Christmas! Within the box is the projector, remote control, micro USB with on-the-go cables and user guide.

The projector is indeed around the size of a 330 boi (to quote our beer reviews, or for everyone else a 330ml can). The unit is heavier than expected but then it also looks robust and compact. Visually the design bears resemblance to a Bluetooth speaker. The capsule is sleek, black and the controls are simple and clearly indicated.

The remote is slim, light and compact in layout.

Out of the box and charging within seconds – the charge indication light is clear with red or green displaying the unit battery status.

Once charged, the setup was very straight forward. I had it close to a wall so it was simple to focus using the manual focus adjustment wheel at the rear of the unit, so there was need to use the Projection Calculator.

Navigating the menus for setup was also a simple task – the unit runs Android 7.1 pre-loaded and gives access to a number of apps (see specs). I began with installing the Netflix app as this is our primary streaming service and the main reason for the purchase but it also boasts apps for Disney+ and YouTube among others available to download straight from the Aptoide app store.

It’s a projector so the more light it has to compete with the less you’ll see. Being somewhat of a projector virgin it was a relatively simple premise to grasp. Initially I had concerns about placement and distance from the screen/surface but trying different distances and simply refocusing made me realize – it works at nearly any distance. (Something to bear in mind when reading Amazon reviews!)

Sound-wise the audio is clear and full with plenty of bass available. I’d like to take a look at the EQ because i’m an anorak but for watching Netflix in a home setting the audio is well-balanced and pumps out of the 360 degree speaker.

The portability is a major factor for me. Charge time is quick and the battery life is as expected, to say you’ll get a few hours watch time. The brand has a solid reputation when it comes to battery life so i’m happy with the 4 (or so) hours of watch time I’ve been getting from each charge.

I placed the projector on a flat piece of furniture but opted for a tripod purchase aswell. The projector screws in securely. For best results i’d suggest using a screen but it works great on plain walls.

The Nebula Connect app can be downloaded onto phone or tablet and makes a great alternative to the physical remote that gives you a virtual mouse with no latency.

My only real criticism of this product is that it doesn’t feature any form of screen protection – given that its a portable speaker but then Anker need to sell accessories aswell don’t they?

You can purchase it via our Amazon affiliate link HERE

Does the operating system of phone or tablet matter?

The projector runs Android but i connect using android phone, windows laptop and Apple ipad via the app.

Can it be powered from mains?

The unit has an inbuilt battery but it can be powered via the Micro USB lead which is included.

Is the device rooted?

You can visit the product site HERE