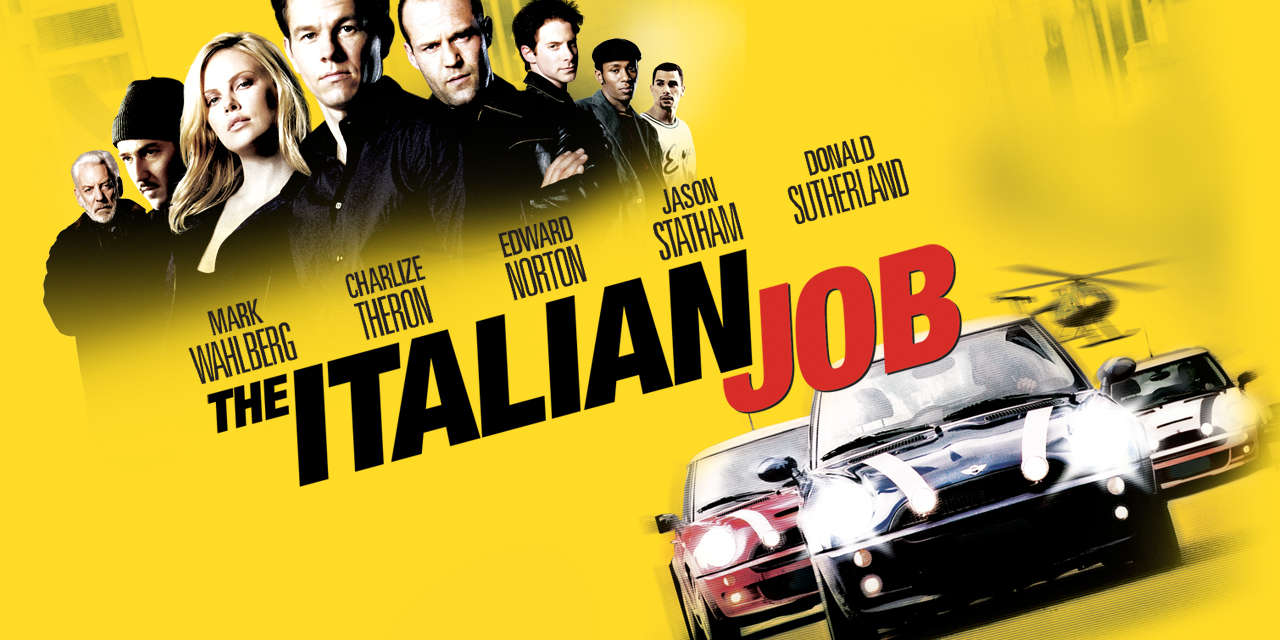 I think we’re all in agreement, over the years a number of crimes have been committed against cinema. I could spend this article rhyming off the perpetrators but i’m better than that (COUGH Ghostbusters: Answer The Call COUGH). The 2003 remake of The Italian Job is one of those crimes. Join us as we take a look at this sweet, sweet abomination. Absolute spoilers.

Watching this film makes you wonder exactly when Hollywood studios decided to start blindly pumping out remakes and reboots without a decent script. At what point did they decide that existing fanbase or nostalgia was enough to make it a success? There must be a spreadsheet somewhere that quantifies this thinking surely?

It can be said that at least this remake has a decent cast: Mark Wahlberg, Charlize Theron, Edward Norton, Donald Sutherland, Jason Statham, Mos Def, Seth Green and Kelly Brook. It’s even got Oscar from The Office (sadly not in the vein of “The Italian Job : a very American remake“)! That cast alone should be a major selling point…

Lets get into it – the opening credits are an artsy introduction to the film. Possibly an attempt to add value to what seems like a doomed idea. From the offset this makes the film look like a spy thriller, rather than stylistic heist movie.

If the film achieves anything, it does a fantastic job of reminding us all how very stunning the city of Venice is. The location looks as iconic as ever in the brief glimpses we see during this section of the film. I do feel sorry for those beautifully iconic canals, which have seen their fair share of speed boat chases over the years. It is however, an astonishing feat for the actors and stunt performers given some of the narrow widths and tight corners presented by the location.

Surprisingly Sutherland and Wahlberg perform a believable father/son style dynamic. Unfortunately this is slathered on within a short time to really drive the emotional impact of his death. This also establishes a firm arc for Sutherlands character, showing he wanted to be a better father but we don’t get to spend enough time with the character to care about it..

Ed Nortons character reeks of dodgy-bad-guy from the very beginning, even before the betrayal. It could be down to the fact that Norton was so unhappy doing the film. Norton‘s involvement was due to a contractual obligation, which he made the cast and crew very much aware of on set.

The classic mini we know and love from the original does appear 25 mins in. It is a vastly different model, being a late Rover-produced model made in the late 1990s, not an Austin Mini Cooper Mk1, as was used in the original film.

There is lot of exposition throughout the early stages of the film. There is some clumsy telegraphing which even sees the cast sharing a drink under a sign in the mountains that reads : Austria 40km.

Charlize Theron plays a vulnerable character in this this film who is also tough as nails. This makes for a refreshingly believable performance. It is reported that out of the entire cast she was the best driver which comes across in her confident performance.

The musical soundtrack is epic and intoxicatingly thematic. There’s cinematic escalations at play and a lot of hip showboating. It’s a great uptempo soundtrack, reminiscent of Gone in 60 Seconds and chock full of absolute bangers!

The Italian Job performed surprisingly well at the box office and at one point there were even rumors of a sequel. The script was reportedly set in Brazil and it was called “The Brazilian Job” with Mark Wahlberg, Charlize Theron, Jason Statham, and Seth Green attached to reprise their roles. It’s reported that the sequel fell apart due to management changes at Paramount Pictures and sub standard scripts. Wahlberg stated as recently as 2015 that a sequel was still a possibility.

All in all remaking the original film is an atrocity but i still believe we got the best possible result.

Today we're looking at Fingerprints Of The Gods by Graham Hancock. Head over to CRAZYDISCOSTU.COM to see why its an important book for understanding our past as a species.
We're getting to grips with this beauty from @bullhousebrewco today! Head to CRAZYDISCOSTU.COM to find out more about JOOSE EXOTIC!
This is where you will find me for the foreseeable future.
Fresh back from the Caribbean we're tasting #Carib lager by Carib Brewery. Join us at CRAZYDISCOSTU.COM for the latest