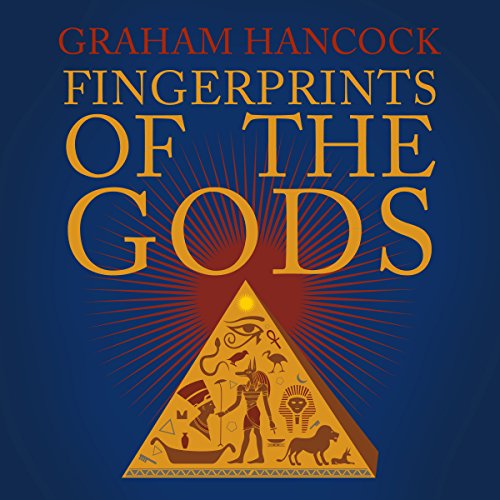 Delving into the creation myths of previous civilizations, this book is by no means any sort of recent revelation, I draw your attention to it as I enjoyed it immensely and found the authors work to be important enough to share. Join is for a look at this book and the author…

“Could the story of mankind be far older than we have previously believed? Using tools as varied as archaeo-astronomy, geology, and computer analysis of ancient myths, Graham Hancock presents a compelling case to suggest that it is.
In Fingerprints of the Gods, Hancock embarks on a worldwide quest to put together all the pieces of the vast and fascinating jigsaw of mankind’s hidden past. In ancient monuments as far apart as Egypt’s Great Sphinx, the strange Andean ruins of Tihuanaco, and Mexico’s awe-inspiring Temples of the Sun and Moon, he reveals not only the clear fingerprints of an as-yet-unidentified civilization of remote antiquity, but also startling evidence of its vast sophistication, technological advancement, and evolved scientific knowledge.
A record-breaking number one bestseller in Britain, Fingerprints of the Gods contains the makings of an intellectual revolution, a dramatic and irreversible change in the way that we understand our past—and so our future.
And Fingerprints of the Gods tells us something more. As we recover the truth about prehistory, and discover the real meaning of ancient myths and monuments, it becomes apparent that a warning has been handed down to us, a warning of terrible cataclysm that afflicts the Earth in great cycles at irregular intervals of time—a cataclysm that may be about to recur.” – Goodreads

Fans of Hancock will no doubt be aware of his passion in the quest for the truth about global antiquity. The companion commentary when reading his work always seems to be the sense that the author is searching for an elusive truth that mainstream academia is either too stubborn, arrogant or pig-headed to explore. Hancocks work as a whole illuminates the possibilities of our forgotten heritage as a species. Fingerprints of the Gods is no exception.

I became aware of Hancocks fascinating work via “alt-light commentator” (is that what the normies are calling him these days?) and internet pot head, Joe Rogan. A regular guest on his show, Hancock has been afforded the opportunity to discuss a manor of topics referenced in his work. Most notably the aging of historical sights such as the monuments on the Giza Plateau and ruins at Tihuanaco. It is these observations that form the core of Fingerprints of the Gods.

The book overall is written in accessible style (for the most part), occasionally getting bogged down in details such as measurements and astrological data, but this is part and parcel to the information relayed within. This is the evidence for the claims that Hancock makes.

What I enjoyed most about this book is that Hancock observes discrepancies in what we have taken as historical fact, produces evidence of the discrepancies, and offers alternative theories regarding them. Other authors in his field may presume to “know” the “truth”, whereas Hancock offers reasoned and (in my opinion) more likely commentary. As with much of his work, Hancock is “just asking questions”, which, given the current climate of vaccine commentary has been demonized by the mainstream media.

This book focuses on the parts of our species history that have either been left out or glossed over for the sake of convenience. If these established theories can’t stand up to scrutiny then why are they the pre-determined historical truth? As Hancock points out, in many cases the evidence for these established beliefs is either manufactured, misconstrued or absent. Modern day fallacies such as :

The Amazon is just jungle and does not contain the ruins of previous civilizations and expansive ruined cities.

That the pyramids of Egypt were just giant tombs, that bodies have been found within and there is much supporting evidence for this conclusion.

That our ancestors knew nothing about the processional cycle of the sun, that the Earth was flat and existence of other planets within our solar system.

Hancock brilliantly highlights modern academia’s reluctance to embrace a new narrative. After all, it’s easier for present day Archaeologists to reduce our ancestors to nothing more than cave-dwelling simpletons whose greatest achievement since inception has been fire, the wheel and scrawling pictures on cave walls.

Regarding the aging of Sphinx, Hancock uses the work of John Anthony West and Robert Bauvel to expertly back up his statements, or at least throw enough shade at mainstream archaeology to cause them a rash.

The most intriguing thing about Fingerprints Of the Gods is how dangerous the book is. Throughout, Hancock makes reference to the narratives of present day academia with a hint of sarcasm, always presenting evidence instead of slander. But a simple Wikipedia search relating to any of the theories presented will throw up terms such as “Pseuedoscience”, “Psuedoarchaeology” and “Historical conspiracy theory”. But why are these theories so dangerous? That’s a good question and not easily answered. After all much of these “scholars” depend on funding for their work, and no one likes to be told their work has been pointing in the wrong direction. It’s also worth noting that Hancock claims only to be a writer who is asking questions, not a scientist, not an archaeologist, an astronomer, geologist or historian – but an inquisitive mind who is intrigued by the gaps in our species knowledge.

What this book does is it casts light on the knowledge we take for granted. Some of the reactions to this book have been nothing short of immature, close-minded and obtuse. For the rest of us it has answered questions and opened doors to further knowledge (as Hancocks conversation with Bauvall at the Giza plateau parallels).

Our species (in this current incarnation at least) has been swaggering around this planet for the last 2 million years or so. In that time we have experienced a multitude of extinction level events and still managed to rise to the top of the evolutionary food chain. Humans, for all our flaws, are a resilient bunch but as Hancock has pointed out “We are a species with amnesia”. Much of our knowledge has been lost over time, along with it skills and recorded history. The burning of the Library at Alexandria can account for a great deal of this but there’s a sense that maybe our ancestors were more civilized than we give them credit for. This narrative gains more weight when you see the accurate and smooth cutting of rock, precision drilling and polygonal masonry at most of our heritage sights across the globe. All of which are not only unexplained but completely unachievable with today’s tools.

I highly recommend Fingerprints Of The Gods (and Hancock’s work as whole). I can’t say you’ll agree with all of his deductions but his arguments are very compelling and will revolutionize the way you see our species. This is an important book that not only asks questions but asks important questions.

Today we're taking a look at the incredible new Lego Star Wars game - Lego Star Wars : The Skywalker Saga.
Today we're testing out these awesome dumbbells for the @metaquest from the folks over at @kiwidesignins ! Head over to CRAZYDISCOSTU.COM to see how we got on!
Today we're celebrating the fantastic work of the 501st Legion!
Nom nom nom! Death Star Ep II Imperial Stout from @northernmonk is our review today over at CRAZYDISCOSTU.COM