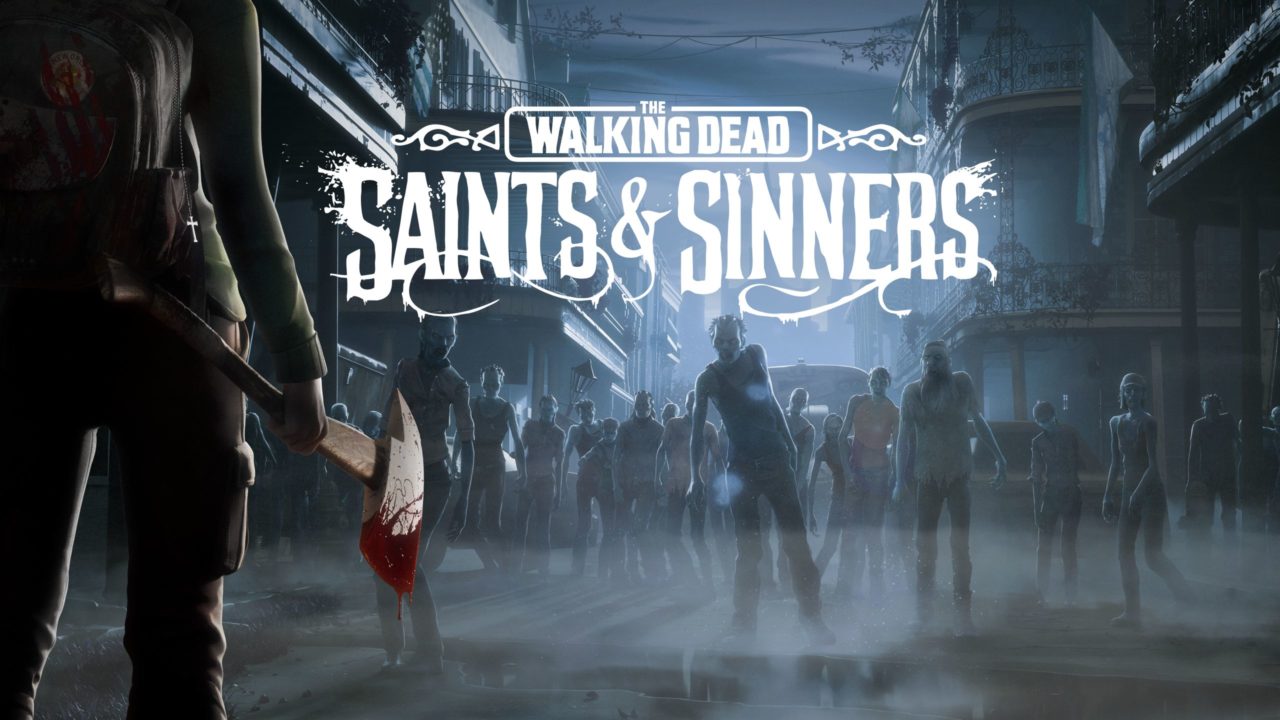 With the second chapter in this franchise dropping soon (December 1st 2022) – We take a look at one of the greatest VR gaming experiences ever made. Join us for Walking Dead : Saints And Sinners.

Say what you will about the source material (i’m referencing the uneven television show rather than the fantastic comic book), Saints and Sinners takes the lore and runs with it independently of the source. The games story is immersive and involving from start to finish and offers the opportunity for satisfying replays.

The story is satisfying however not a lot of context is given to the factions at play and their reasons for fighting. This context eventually becomes apparent through play. The characters and their motivations are adequately fleshed out to get through the story with much of the tourists backstory and motivations being left empty to fill the needs and feelings of the player.

The art style isn’t photo-realistic but that’s not to say it doesn’t look dark and gritty at some points during the game.

The soundtrack is eerie and full of sub bass that adds to the experience. You’ll notice this greatly whenever you can hear an enemy (living or dead) close-by.

In terms of the gameplay and controls – there is a huge amount of satisfaction from killing walkers with melee weapons and the combat feels fluid. The controls are intuitive for the most part and even quite ambitious. During some frantic combat I did find myself pulling out a flashlight or backpack when reaching for certain weapons – this was largely due to the games penchant for spawning undead out of nowhere, a trait which the show was very guilty of.

Some weapons are easier to use than others obviously and each has their own benefits – but you can’t go wrong with a 9mm and tonne of ammo, with a bow and arrows as backup. The dynamics of the bow and arrow are great once you work out the aim, which is more a feeling rather than a technical point and shoot aiming process.

The crafting process is satisfying and means the game mechanic centres around scavanging and scarcity. Theres a sense of earned achievment when you gather enough supplies to make weapons and upgrade work benches.

The Aftershocks DLC (released on September 23, 2021 as a free update) adds a new slant to the game, but as it is end-game content the player is experienced enough to handle the additional combat and risk. The DLC doesn’t have the same sort of payoff, however. Without going into detail or spoilers – nothing substantial is gained and no major discoveries affect the game significantly but it does feature some added content.

This is one of those games that I regularly recommend as a great immersive experience for new users. You don’t have to necessarily be a fan of the franchise or even the genre itself but it is a fantastic example of what VR can achieve.

When combined with any sort of haptic accessory (like the Woojer Vest Edge) or audio option (like the Air 3 (Soundpeats)) the game becomes frighteningly immersive.

Walking Dead : Saints And Sinners has a substantial amount of playtime and can present as much of a task or ease as you want it to depending on your play style.

What has this speaker got that the others don't? Today we're looking at the Vibe Bluetooth Speaker from @soundynamic_official - head to CRAZYDISCOSTU.COM
Today we're checking out the TickTock 5G Rugged Smartphone from @unihertzphone
An autopsy of The Walking Dead is now live on CRAZYDISCOSTU.COM
Finally got round to finishing this. Lovely game