It’s been a while since we set foot on such hallowed soil and I for one am elated to be back in Dragonborn country.

Elder Scrolls Online (ESO) has become something of a faithful old companion at this stage – in the sense that the 2 of us have lost days and nights adventuring the stunning vistas of Tamriel together, looting bodies, running away from battles and desperately trying to efficiently maximize bag space.

As with previous ESO releases I had some preparations to make before play could begin :

I began by notifying my employer that once again I would not make it to the office for the foreseeable future. As there was a global pandemic in effect at the time they whole-heartedly agreed but reiterated that i would still need to complete the functions of my job.
My long-suffering fiance rolled her eyes.
Finally I notified my friends and family that I would not require interaction for the next few weeks. They too, rolled their eyes…..

As with previous ESO reviews (You can find them at the bottom of the page), the game world is so vast and expansive it’s hard to know where to begin. This chapter leans into Vampires and Werewolves as part of the year-long theme ‘Dark heart of Skyrim‘ storyline and is bathed in nostalgia for the most successful of the Elder Scrolls releases to date. Even from the explosive opening the game embraces this thinking and runs triumphantly with it.

Fan-favourite Lyris Titanborn (and the talented Jennifer Hale) returns as a main character in this mystery adventure. She looks like Taylor Swift if she was built like a brick shit house. The beautiful hard-as-nails adventurer has returned to assist you in getting to the bottom of some strange killings, weird ceremonies and dodgy-looking characters, aligning herself with your character to form an unlikely buddy-cop duo.

It’s safe to say Lyris and I are close at this point. We took down a few Bone Colusses back in the day defeating Mannimarco, if you know what I mean* NUDGE NUDGE, WINK WINK. (*We fought some Bone Collusses together)

This buddy-cop dynamic early in the game works well and eases the player into the story. For instance – we happened upon a crime scene and began our investigation. Lyris secured the area and interviewed the associated parties while I searched the nearby bookcases for lore and sweet rolls. It’s a strong partnership that largely involves me standing behind her while she interrogates suspects. The old “good cop / small cop routine”. No sweet rolls were discovered. The investigation continues…. 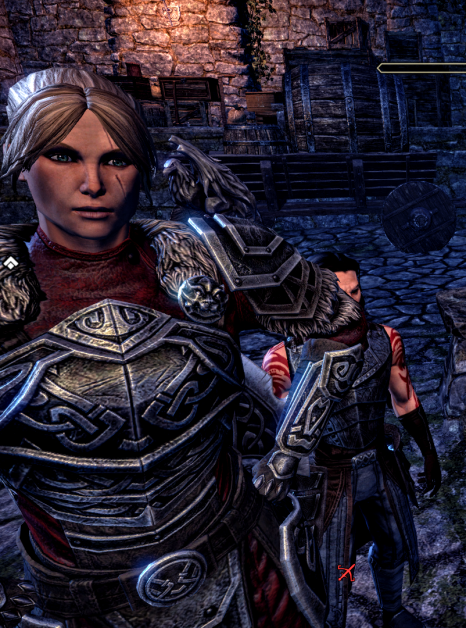 Well for starters we’re furnished with a new zone to explore in the form of Western Skyrim (comprising iconic locations Solitude and Blackreach) which has been lovingly recreated.

The Antiquities system – a kind of treasure-hunt activity. Think of the process as Battleships meets Mine-hunter but comparable to World Of Warcraft‘s Archaeology system that has the feel of a mobile game. 2 new skill lines in the form of Scrying and Excavation accompany this. These take a while to level up but offer a relaxing mini-game style process that offers respite from questing and delving. The process also provides a fresh angle to the game and a chance to grab some mythic gear. This feature is intriguing and looks like something that will be further developed with future releases.

Theres a new 12-player Trial event called Kyne’s Aegis where you repel a horde of monsters and collosal sea giants.

The addition of a new world event: Harrowstorms. These are much like the dark anchors or dragons and provide a good place to meet other players and party up.

6 new delves, public dungeons, and stand-alone quests with about 30-40 hours of new content (possibly even more)

I haven’t spent much time exploring the Werewolf or Vampire abilities within this release. It’s been a long-term staple of the franchise to have blood-lusting toothy Goths knocking about and Greymoor is sporting that trend as a main plot point, riffing heavily on Skyrim’s Dawngaurd expansion.

The Vampire skill line has got a bit of an overhaul with this release, which some longer toothed counts may find disconcerting. This overhaul is game-wide and also integrates with the base game : Moving forward it has become harder to sustain Vampirism at higher levels. Gaining higher levels obviously comes with penalties but these take the form of reduced health recovery, increased damage from flame attacks and an increased cost for non-Vampiric abilities

VAMPIRE SERVICE ANNOUNCEMENT : Much like with the addition of the Necromancer line it is important to remember that using your powers in a settlement is a crime so plan your next NPC buffet carefully.

The voice talent in ESO is superb

For me a huge selling point of ESO, and a factor that keeps me coming back, is the impressive voice-acting talent that continues to add depth to the game narrative. In past releases we’ve heard the likes of big names such as Michael Gambon, Kate Beckinsale, Bill Nighy, Malcolm Mcdowell and John Cleese to name but a few. The big names fall in line with the rest of the voice-talent as the building blocks of ESO‘s stories and ever-expanding lore.

From what i gather Zenimax Online are rolling out patches consistently to provide gamers with the best experience possible and so far I haven’t experienced any instances of glitching or texture loss as yet – something that fans of the series have been critical of in the past.

In my opinion Greymoor brings a fresh feel to ESO despite being routed in nostalgia. The environments are alive and the mystery is involving. The Music as ever helps to set the scene moving effortlessly from themes dwelling in the wistful and atmospheric, to involving dramatic tension during action sequences and battles.

A positive for this one (as with other chapters) is that you can drop straight into the Greymoor story from any level and any updates to skill lines etc are ESO-wide.

A critical piece of commentary would be the lack of SLAP option when engaging with Shield Corporal Thjol in the early chapters, but i can live without this for now.

There is no new PVP content this release and to be honest i’m happy with that. I don’t know many people who were crying out for it. Such is the environment and continues to be the winning recipe for ESO.

It’s easy to forget that ESO has a Main Quest Storyline with each of these releases. Not that it isn’t engrossing, more that the side quests are also quite involving and in most cases require as much attention for the player. That being said, the releases blend in with the existing world so effortlessly there is no apparent overlap of content – just an expansion to the adventure. (I’ve spent the last few months completing jobs for every wafe and stray that crosses my path and I’ve decided it’s time to get back to the Main Quest)

Greymoor isn’t just the awkward younger Goth cousin of Skyrim, but it is definitely a blood relation. It is not just younger in the sense that ESO is set nearly 1000 years before Elder Scrolls V, it’s younger in the sense that there is a glimpse of youthful hope and exuberance about it. Despite the black clothing, eyeliner, painted nails and bleak world view – you just know this kid is gonna be alright. Greymoor has it’s whole life ahead of it….

You can check out our previous coverage of ESO here :

Music To Quest To : Epic As Feck Playlist

Loving the customisation of Snap this season of #fortnite ! Tag us in your snap creations
Today we're getting seriously offended about the Ricky Gervais Netflix Special : Super Nature. You can join us for some rage over at CRAZYDISCOSTU.COM
Today we're looking at a fantastic travel solution for Quest 2! The folks over at @vr.cover have let us review their awesome travel case! Head to CRAZYDISCOSTU.COM to get the info
Today we're enjoying the sun with a can of Stylus from @signaturebrew !