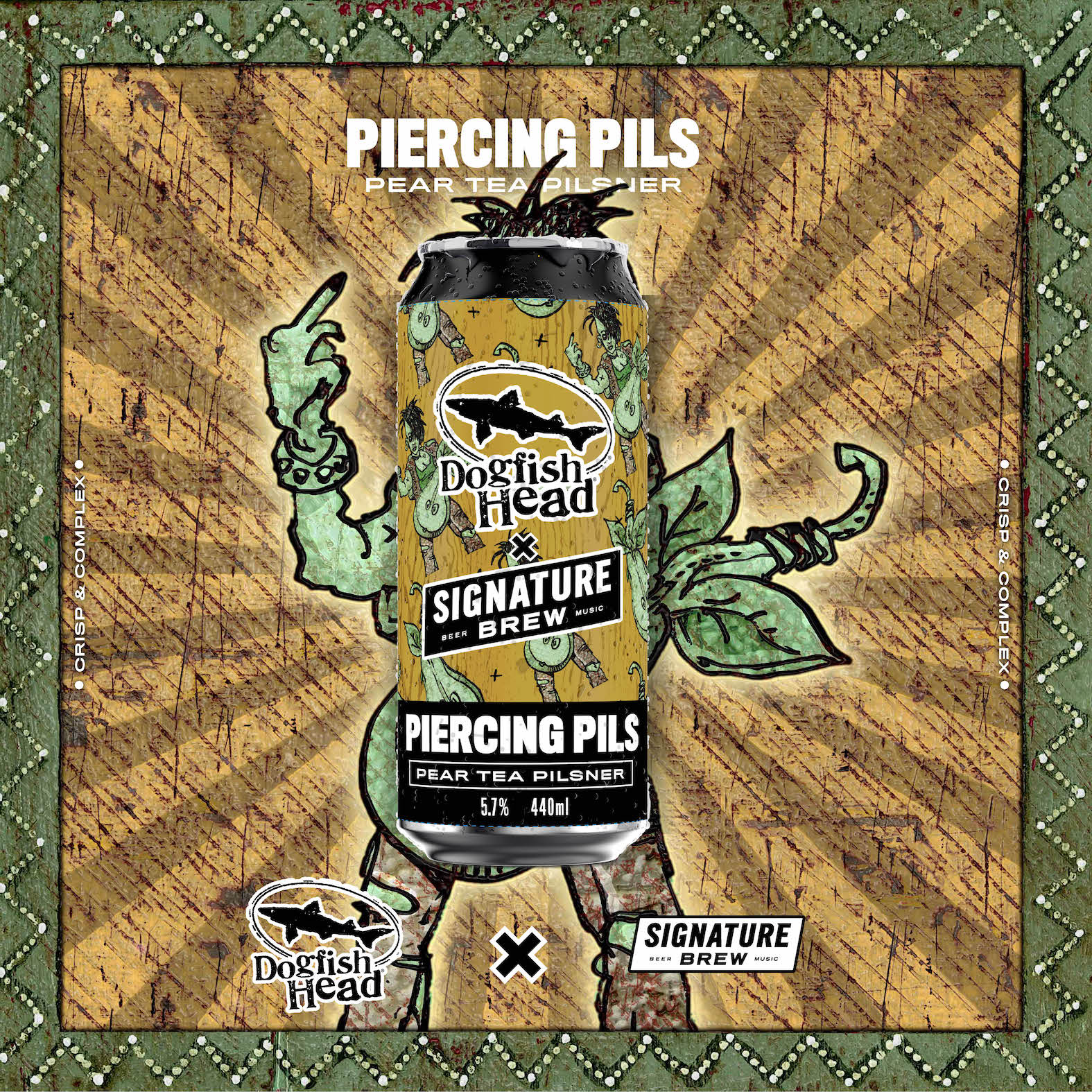 Signature Brew have released their latest collaboration which celebrates the intertwined history of punk and craft beer by teaming up with legendary US brewery, Dogfish Head, and punk veterans, The Mekons, to create Piercing Pils,(£5.50 per 440ml can), a crisp, refreshing 5.7% ABV Pear-Infused Czech Pilsner.

“Piercing Pils is a Czech Style Pilsner brewed with a White Pear Tea and Pear juice. Both the juice and the tea were added in the kettle during the whirlpool, after the boil, for maximum flavour and aroma contribution…You ever heard a pear sing? The pear’s fruity complexity pierces right through the spicy Czech Saaz hops beautifully, adding a gentle acidity to this pale lager that makes for a crisp refreshing sipper. Amarillo hops add nuanced citrus notes that meld perfectly with the fruit.”

Cracking Piercing Pils open there’s a percievable aroma of pear sweetness, but not sickly so. On the pour there’s a golden and clear complexion and overall it could be mistaken for a slightly darker pear cider once it’s in a glass.

On the tastebuds, there’s a very defined lager taste. The pear sticks its head around the door but disappears sharpish. It’s only when the brew is held in the mid tasting does the wealth of flavour come alive and there’s lighter notes on offer.

Piercing Pils boasts dark tea notes but relies on that pils style as a delivery system.
As she does with most brews I try, my wife’s claim that it “smells like beer” is (for once) a fair commentary in this instance. Despite those pear hints, this is a beery tipple. A lager sup. It is a pils after all….

However unlike its style peers, I wouldn’t call this a necessarily crisp Czech Pilsner, there is a crispness, but it is smashingly full of body – a nice departure from the default style. The 5.7% content doesn’t factor into the brew, sure it lends a bit of weight to an already boozy profile but not enough to sway the outcome.

This could have been a sickly sweet gimmick (of which i am also a fan) but instead what we got was a mature and crafted (are the gatekeepers going to come for me for using that word?) beer which has enough body to keep me interested but not so heavy that I want rid of it.

You can check it out on their website or via any decent stockist.

An autopsy of The Walking Dead is now live on CRAZYDISCOSTU.COM
Finally got round to finishing this. Lovely game
Coffee heaven! Today we're looking at @waaqacoffee , a curated coffee service that offers the finest in local roasters. Check it out at CRAZYDISCOSTU.COM
Happy Halloween!